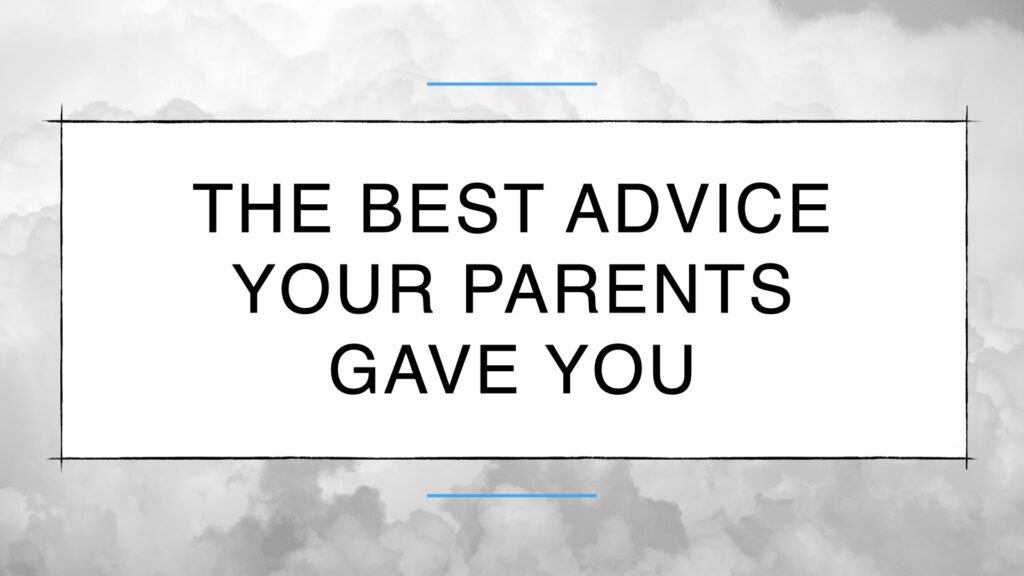 Last week, I asked people on Twitter what was something their parents told them as kids but they didn’t realize was true until they became adults. Over 250 people responded. Below are some of my favorites:

“’Don’t set yourself on fire to keep others warm.’ Heard it as a child but seldom heeded it in my 20s.”

“‘No one can make you feel the way you don’t want to feel.’ My Dad. I don’t think he’s ever come across Stoicism in his life. Remarkable how right he becomes the more this concept takes root.”

“’Accept the situation, make a change, or leave.’ Reached a new level of understanding around this over the past year.”

“’If you do something, do it to the best of your ability. Even if it’s picking up dog shit, you give it 100%.’ Literally my dad’s words.”

“’Not all the people who party with you will starve with you.’ I realized very very late.”

“As my dad loved to say: ‘By the time you realize what your father said was right, you’ll have a son or daughter who’ll tell you you’re wrong!’”

You can read the whole thread here.

I suppose I should chip in with something my parents got right that I never really appreciated until I was an adult. If you look at that thread, at least a quarter of the answers mention something about money—saving money, not falling into debt, not wasting money, spending within your means, etc.

If there’s one thing my parents got right with me, it was money. They were incredibly strict about it, particularly my dad. From the time I could wipe my own ass, my parents turned my brother and I into wage workers doing work around the house. Instead of just paying us, my dad gave us the option of taking the cash each week or leaving a balance with him and collecting interest on it. I probably earned my first interest payment around the time I learned to read.

A few years later, when I wanted to buy a Lego set I couldn’t afford, my dad loaned me the money with a serious amount of interest attached. I was still too young to understand percentages or calculate APY, but man, did I learn fast not to borrow a bunch of money! It took me nearly two months to pay him back, which, for a nine-year-old, was a fucking eternity.

I hated all this, of course. I’d scream and cry and complain and ask why they couldn’t just be normal parents and buy me stuff like all the other parents did. It felt mean and unfair. My family was not poor. On the contrary, we were quite well off. So why the hell did I have to get a job as soon as I was legally able to just to buy myself a new Nintendo controller? It seemed insane!

Then I got to college and discovered that pretty much all of my friends were perpetually broke and I wasn’t. It was only then that I began to appreciate the head start I had gotten. Even now, I’m shocked at the financial illiteracy of a lot of adults I meet. There’s a reason personal finance is the #1 item in my article of what should be taught in every school but isn’t. There’s also a reason why personal finance is always the number one response I get from readers when I crowdsource for any advice article from them.

In life, money matters. A lot. It affects every aspect of adult life: your career options, your health, your lifestyle, your self-esteem, your romantic relationships.
Maybe in a perfect world that wouldn’t be true. But we don’t live in a perfect world. https://markmanson.net/newsletters/mindfck-monday-79